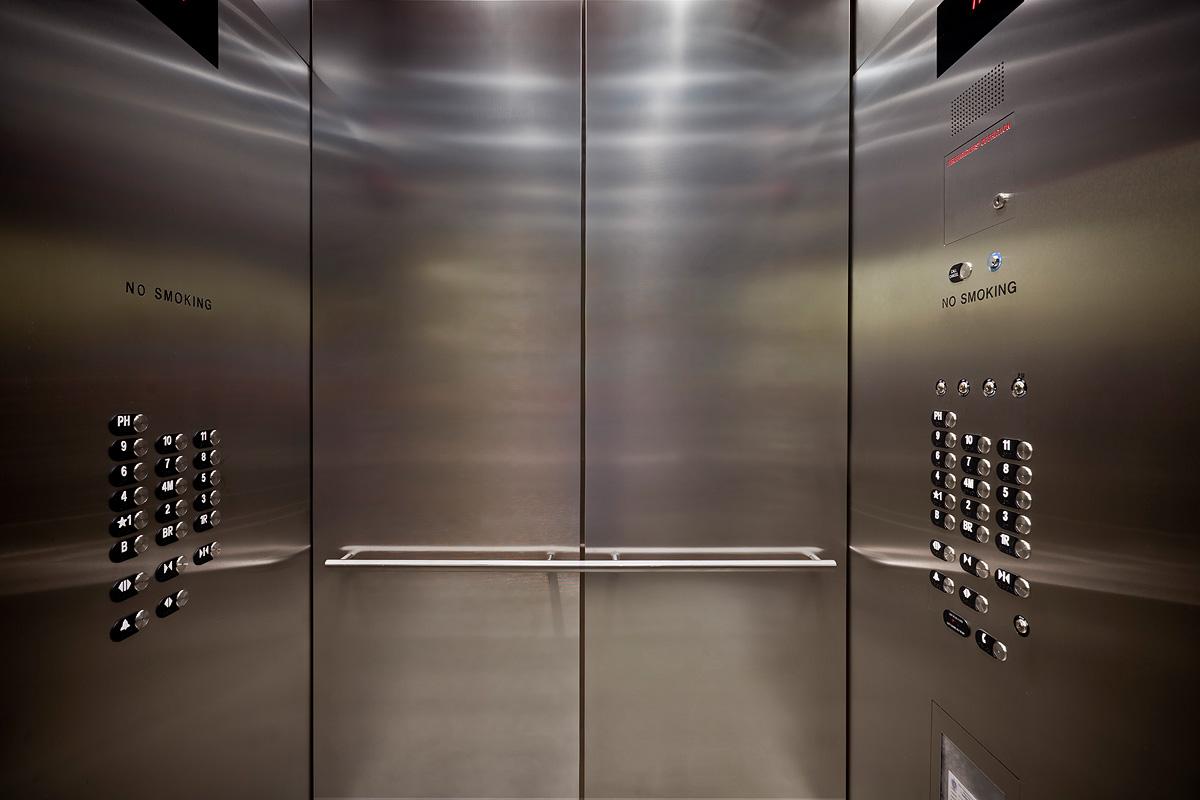 “Do I know you?” said Packer.
“No, you don’t,” said the man.
The stranger had stepped into the elevator just before the doors closed and fixed eyes on Packer. That gaze had not faltered.
“It’s just I swear this isn’t the first time I’ve seen you today,“ said Packer.
“You would have been stupid not to,” said the man. “I’ve been following you since I spotted you at the diner.”
“The diner? That was hours ago,” said Packer.
“It was. Four and a half of them, to be precise,” said the man.

Okay. The man was well dressed, didn’t look like your common or garden mugger. Did he work for the courts? Was Packer about to be served? He looked into those unflinching eyes, saw something, something… familiar.
“I do know you,” said Packer.
“You might recognize me,” said the man. “But you certainly don’t know me.”
“Did I do something on you? Cut out in front of you or something?”
The man said nothing.
“School,” Packer blurted out. “We went to school together.”
The man broke a small, very small smile. “We were in the same class, but we did not go to school ‘together’,” he said. “We were about as far from ‘together’ as you could get.”
Packer went through the faces in his head, all the way from elementary to-
“Junior High,” said the man. “That’s where you don’t remember me from. Even if you did, I look a bit different now. A lot of things about me have changed over the years. The level of forgiveness I afford those who take from me being one of them.”
“I’m sorry?”
“You will be.”
The elevator came to a halt. Parker moved towards the doors, but the man blocked his path.
“This is my floor,” said Parker.
“No, it isn’t. It isn’t yours at all. But you liking to think you own other people’s property wouldn’t be new, would it? Parky.”
“No one has called me Parky since-“
“-you were the class-A class A-hole,” said the man, pushing the button for the very top floor of the parking structure.
“What’s this all about?”
“A pencil case.”
“Excuse me?”
“My pencil case. It had a tartan pattern on the outside, that I’d had since kindergarten, that was given to me by my grandfather the same year he died. That you thought it would be good fun to take from my bag when my back was turned, write a hilarious ransom note and return to me in tiny little pieces until you got bored.”
“Fish?”
“Yes, or ‘Stinky Fish’, as I seem to recall you christening me.”
“Look… David, that was just-“
“That name, I used to spend hours in the shower washing and scrubbing, convinced I did actually smell.”
“That was just a bit of fun. Same with the pencil case. It’s what school kids do, you must understand?”
David Fish, no longer the fat, sad-looking kid down the back of the class, but this sinewy, shark-eyed man right up in Parker’s face, smiled from ear to ear.
“I do understand. Now,” he said. “I understand how all those little paper cuts over the years add up, how an individual’s feelings can be hurt to the point where they plain don’t work anymore, how one day you find you’re able to just take emotions, especially all the ones that hold you back from fulfilling your potential – fear, anxiety, doubt, guilt, grief – out of the equation.”
“Where are we going here?” said Parker.
“The top floor,” said Fish, pointing at the LCD display on the wall of the elevator.
“I mean with this,” said Parker. “What do you want? Do you want me to tell you I’m sorry? Then I am. About a lot of things, as it happens. There is so much I regret doing to people during that “phase” of my life. Like when-“
“I don’t care about any of that, or any of them,” said Fish. “Feelings. Remember, Dickhead? I have no use for them anymore.”
“If that’s the case, then why are you here? It can only be for an emotional reason.”
Fish wagged a pointed index finger at Parker. “Now you’re thinking. Clever boy,” he said. “It’s the pencil case, of course.”
“Well I can’t give it back to you, if that’s what you want,” said Parker.
“I get that. It’s just that from time to time, it pops back into my head. Niggling little thing that makes me feel – which is a problem in and of itself – angry, sad.”
“I’m sorry, what else do you want me to say, David?”
“Nothing. Absolutely nothing,” said Fish. “Please. Your voice sounds like fingernails being drawn down a blackboard to me.”
Parker did as he was told. A bead of sweat rolled down the small of his back beneath his suit.
“I actually still had the pencil case, stitched back together, mended by my mother way back when, until a couple of months ago. But I got rid of it. And you know? It actually helped a lot. Dispensed with some of those niggling feelings. Today, here and now, is about expelling the rest of them. See, feelings get in the way. Without them I’m a whole lot more efficient at what I do.”
“And what, what is that?” said Parker.
“I told you to be quiet, Parky. But seeing as you’ve asked, and you sound genuinely interested, I’ll show you,” said Fish.
The punch came out of the proverbial nowhere. No wind-up, no exertion on Fish’s face.
Parker couldn’t breathe. He clutched his throat with both hands. It felt different. Wrong. He tried to inhale but couldn’t. The strength sapped out of his legs and he slid down the wall to the floor of the elevator.
Fish hunkered down in front of him. “Nice suit. Expensive shoes. You’ve done well for yourself, Parky. Stealing other people’s shit didn’t do you any harm.”
Darkness started to creep in like the tide at the edges of Parker’s vision.
“I’m not happy at what I’ve become,” said Fish, “at what you made me.” He stood to his feet as the elevator doors opened. “I do wonder how life will reward me now, now that I’ve stolen something from you.”