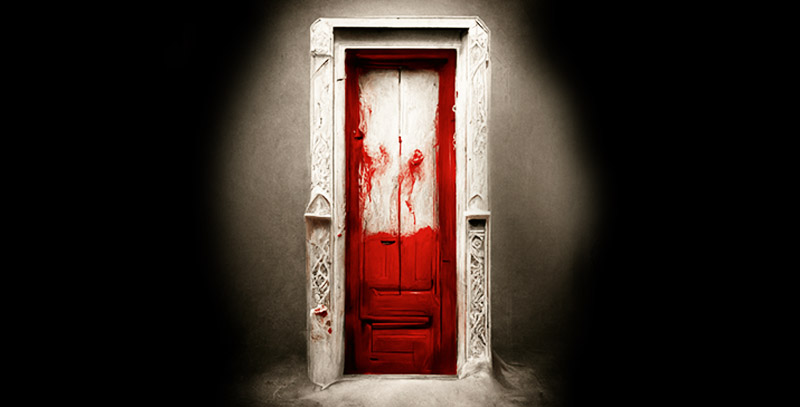 Philip couldn’t get the remainder of what Joanna maintained was his favourite word out. He’d come home early to the secluded cottage they’d moved into during the winter, hoping to surprise her.

Turned out she had been thinking along the same lines.

She wheeled around to look at him, a little lost for words.

Same way he was.

“That’s good,” he replied. “Because what it looks like is blood. A whole lot of blood. Like you smashed someone who really pissed you off into it with some ungodly, demon power you neglected to tell me about.”

She held up a paintbrush. “That’s not what it is. Blood, I mean. Obviously. I just thought the front door could do with some brightening up. It was so drab.”

“It’s the farthest thing from that now,” he said. “I’m okay with blood red. Really, I am. But, Christ, your brush technique is terrible. What are you doing? Throwing the paint at the door? You’re making a Pollocks of it. Show me.”

Laughing at his own joke, Philip took the brush from her and dipped it into the paint can at her feet. “You need to put an old towel or sheet on the ground, love. Look at the splashes, I mean the arterial spray, all over across the footpath.”

She just shrugged and looked on as Philip applied the paint to the door in a fluid up-down motion. “See. You have to go with the grain, always in the same direction. You can’t be jumping all over the place the way you have here. The finish will be all patchy and uneven.”

He refilled the brush and put another application of paint on the door. “That’s weird.”

“Did you start this and leave it for a while?”

“Because… It’s like…” He took up the paint can and looked at the paint already on the door. “The colours don’t match. These two reds are different. Did you try two different paints?”

“Whatever the first paint you used was, it’s shit. Piss, more like. Watery.”

Philip leaned in close to the door and sniffed. “It doesn’t even smell like paint.”

He stepped back and shook his head. “This isn’t going to work. Jesus, Joanna. Fair enough, you wanted the door painted a different colour.  But why didn’t you tell me first? I could have picked up good quality stuff on Saturday and done the job properly. This is a bloody mess.”

“Really?” he said, turning around to look her with one cheek raised in a half-smile, his eyes squinted. The look he gave her when he wanted to show her just how much more knowledgeable he was than her.

“Yes,” said Joanna. She smiled and took his face tenderly in her hands, then pressed them hard into his mouth, prising his jaw open until it broke away from his skull. As he spasmed and went into shock, she reached down his gaping maw and pulled his tongue out of his throat.

With one hand, she held the organ like a paintbrush and moved it up and down the door in the same way Philip had demonstrated. She used her other hand to hold his limp, quivering body in place so that he could watch her progress.

She pulled his stricken face close and watched his eyelids flutter.

“Much better shade of red than what was inside that cow mother of yours. Arriving on the doorstep unannounced. Really pissed me off, like you said. Bitching about how I was neglecting the old paintwork. Until I just snapped. And unleashed this ungodly, demon power I neglected to tell you about.

“Five litres of blood in the adult human body, you know. Roughly. Should be left with enough to do the window frames and fences.”