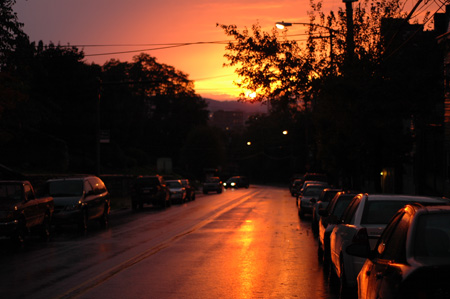 Jesus.
They were coming back.
Hadn’t they had enough?
Didn’t they get tired?
I was exhausted, physically and mentally. The last few weeks had left me spent. And yet here they were back to wring the last of my reserves.
Their feral eyes glinted in the orange evening light reflected in the fresh puddles. I’d hoped, prayed, the afternoon rain would have driven them away for the day. But as soon as it stopped and the sun tore a hole in the cloud overhead, they tore a hole in the silence, howling, squealing, growling and nipping at each other as they returned to dish out more of their onslaught, the very thought of more of this torment a torment all of its own

The small one took up his usual position beneath the tree, beating the trunk with a stick. He was their cheerleader, their drummer boy, their flag bearer, heralding them into battle. And he did his job well, propelling the rest of the band into a frenzy as they rushed about, quickly working up a sweat which would soon glisten on their skin and their matted hair. The others broke and twisted low-hanging branches from the tree and wielded them like swords, swinging them around their heads, looking for someone, anyone, even each other whenever the opportunity presented, to lash out at.
Their leader, the alpha, even though he couldn’t have seen me where I hid, was looking right at me. Sensing my presence, and my frustration I shouldn’t wonder, the animal grabbed the head of the last surviving rose on the bush next to it and, smiling ear to proverbial ear, wrenched it free, dismembering the flower in its filthy paws and dropping the remains to the ground, petal by petal.
Two of the females broke from the group and approached him to investigate. He snarled, bearing his teeth, and screamed into their faces. They jumped back, frightened at first, but then at once excited. They screamed back at him, only louder, accepting his challenge. He roared back, louder again, and the rest of the group swooped in, not to be left out or outdone. For a solid five minutes, a bloody eternity, they did their best to explode my ear drums, trying to best each other with the decibel level of their shrieks.
Then.
Silence.
The hush so sudden, I thought for a moment I actually had gone deaf.
As the sun dipped down behind the rooftops, I watched them cluster and stand back to back, assuming a defensive stance, the ones on the edges scanning the surroundings for trouble.
By the time the alarm was sounded and they tried to scatter, it was too late. A group of adults descended upon them with impressive speed, plucking the younglings on the perimeter up and tucking them under their arms like footballs.
The rest of the group found their escape route blocked by two more adult bulls, who had flanked them, and they gave up, accepting their fate.
But the alpha. He was not going to give in so readily.
“Five more minutes,” he sobbed, bursting into tears so expertly he could have been gifted all of next year’s Academy Awards right there on the spot. “Just five more minutes.”
“I gave you five minutes already,” came the reply from the balding bull bearing down on him. “And you took ten.”
The alpha threw himself to the ground and beat his fists off the concrete. His father stood over him. “It’s time to come in now. Back to school for you in the morning.”
Then came the four words to rescue my sanity from the abyss.
“Summer holidays are over.”